Let everyone know a little about yourself
Post Reply
25 posts 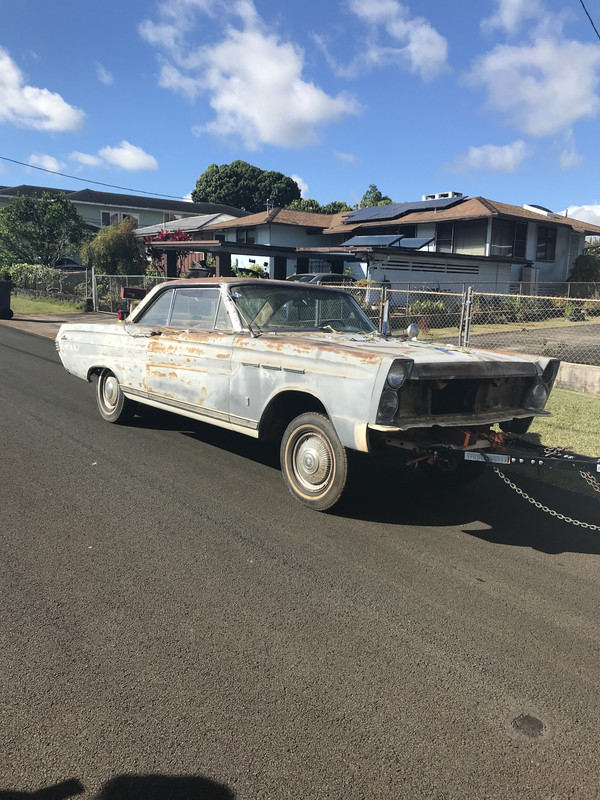 A better picture of Helen, that’s the name my wife gave her honoring her grandma.
Aloha Ed
Top

A better picture of Helen, that’s the name my wife gave her honoring her grandma.
Aloha Ed
Top

I would like to run headers on my 65 comet. It is a 4 speed car with power steering. What header will work? Not much room. Aloha Ed
Top

Lots a stuff in driveline on brakes, your V 8 spindles are great same as Mustang. Early Kelsey/Hayes disc brake stuff is good, cheap, are widely available.
Use a 15/16s bore master cylinder and power booster not needed. Lots a guys here have used this combination including me.
Fred
I'd rather do it myself if it's done right or not,,,isn't that what hotrodding is all about?
Mission bc 09/12 (I think)
Roy, Brian n me

A lot of guys use the CSRP conversion kits:
http://www.discbrakeswap.com/Mustang%20 ... SWAP1.html

Life is much easier if you install an export brace to replace the shock tower braces. Gives a lot more room for the MC/booster. Also makes general engine access better.
https://www.ebay.com/sch/i.html?_from=R ... t&_sacat=0

right on ,,,,!! helen is a good handle for a 65 comet....I knew a GIRL in the 5th grade by that name...she was the sexist thing in elementary school...but the little heifer wouldn't give me the time of day

You probably rode your bike like you drive a car, and she was skeered of you!

Any word on what headers fit the best without any or little modifications? I’ve been looking at long tube, hugger headers, but not really comfortable with what I am reading out there. I would like feed back on those that have installed a good set that fits great but yet, don’t breaks the bank. Thanks for the information on the K/H disc brakes. In the swap1 kit, is the master cylinder a 15/16” bore? I will be making an order soon. Thanks also on the x-brace. My Comet x-brace looks cheap and looks welded on. Aloha and mahalo from Hawaii, Ed
Top

Hello, Comet and high performance Ford enthusiasts; my name is Jim Wahl,; I have owned two 1964, cyclones; I currently have a 1965, cyclone four-speed with California black plates, also Previously a 1966, cyclone GT 390 and a 1967, cyclone GT 390 California black plate. My current 65 cyclone is an original DSO 52 Los Angeles district , original polar white and an original four-speed car, The car was built September 19th 1965 , original “ A “ code 289 , block cast September 9th 1965 and is a early six bolt . Engine is out going through upgrades but will still be the original “289” . It needs the dash bezels restored? Any help please? And correct tachometer? I’m building it more as a era correct time capsule, with acceptable mods of the sixties for stoplight meetings in Pomona California on a Saturday night cruise.

Return to “Introduce Yourself”